The Resourcify Sustainability Index Report: This Is the Circularity of German DAX Companies

A circular economy is considered a fundamental part of the solution to being more resource independent and saving our planet from a catastrophic climate change trajectory. Earlier this year, plans were announced at the level of the European Union on how to establish a circular economy in the EU member states. At the global level, a fundamental shift in thinking is also taking place, with the United Nations announcing an agreement that promises to move away from plastic waste. Outside of the political arena, however, the issue of the circular economy is also being addressed and acted upon directly at the business level. Every single company producing waste is finding its own ways to deal with it. But how do Germany's largest corporations fare in tackling disciplines such as recycling and the circular economy?

To gather reliable figures on this topic, we took a closer look at the annual and sustainability reports of Germany's 40 largest companies. The result is the Resourcify Sustainability Index Report, which you can download here.

Summary of the key findings

25% of German DAX companies did not report any waste figures

During the course of our research, we found that many companies fail to disclose key figures around sustainability (such as waste figures or recycling rates) in their annual reports. 25%, that is, a total of 10 of the 40 largest companies in Germany did not disclose waste figures in the documents we analyzed or when asked. Considering the political framework emerging on the horizon, it is certainly high time for these 10 DAX-listed companies in particular to get serious about implementing sustainability regulations. The first step towards this has to be the reporting of the most important key figures in their annual reports.

39% of the waste generated is not recycled

On average, the surveyed companies recycle 61% of the waste they produce. A recycling rate of 61% may sound reassuring at first glance – it's certainly a step in the right direction – however, this also means that on average 39% of all waste produced by DAX companies is not being recycled at all. Conservatively calculated, we are still looking at around 2.5 million tons of recyclable materials per year that are not returned to the value chain but are usually simply incinerated.

Recycling is the most frequently mentioned topic by the DAX 40

To better understand what these companies are talking about in their annual reports, we defined keywords related to the circular economy. "Recycling" is mentioned most frequently in the reports, followed by "circular economy" in second place. Henkel and SAP are the two companies that talk the most about the circular economy and back up their statements with actions, as they are among the top-ranked companies in terms of recycling rates.

Comparability with the help of the Resourcify Sustainability Index

Throughout our research, we were able to source a large amount of publicly available data. To ensure comparability between companies, we combined all the researched metrics around the circular economy into one index - the Resourcify Sustainability Index (RSI). Since the companies operate in different industries, the index is almost entirely based on relative numbers to provide some degree of comparability. The RSI's composition and the standardization of metrics made for this purpose allows us to evaluate the actions of the companies at a glance. A key factor in the Resourcify Sustainability Index is the companies' recycling rate. Mercedes Benz, for instance, manages to rank highest despite producing 949,000 tons of waste. SAP and Siemens Health also score well, paying close attention to implementing circularity in their annual reports with cited measures, using many related buzzwords, and achieving good recycling rates.

For a more in-depth analysis, we recommend taking a closer look at the various key figures in our complete report. Download it for free.

The Resourcify Sustainability Index: How sustainable are German companies? 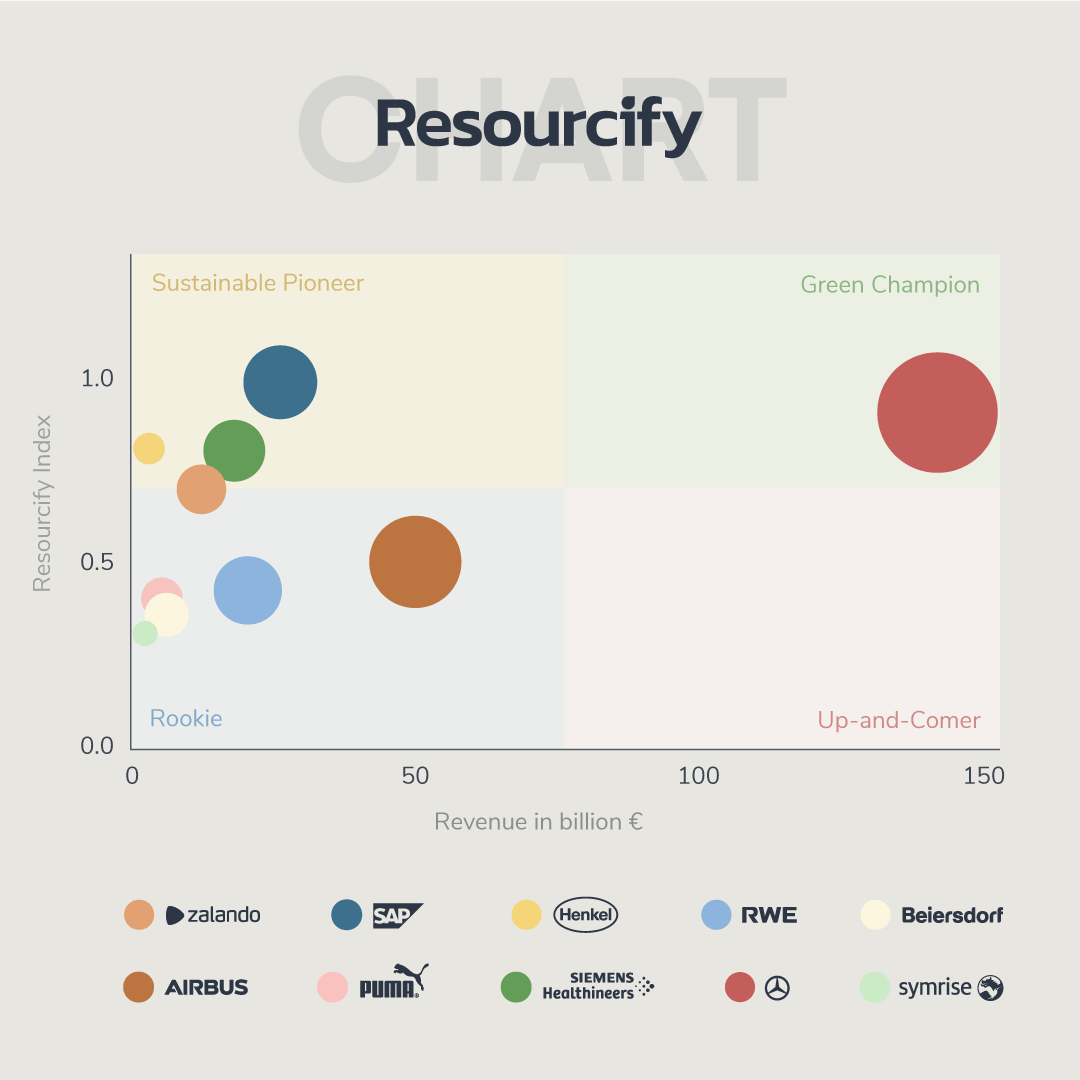 The data collected from these indicators provide the basis for the index figures and were also recorded in the form of two BCG matrices in which both the RSI and other variables such as company sales and the number of employees were visualized. As a result, the analysis demonstrates which DAX companies are performing best in the areas of sustainability, waste management and circular economy.

Based on their sustainability efforts according to RSI combined with revenue levels, the quadrants are named as follows: Green Champion, Sustainable Pioneer, Rookie and Up-and-Comer. For a deeper insight and the results of our analysis matrix, our extended report is essential, click here to download it.

“For some of the largest companies in Germany, the idea of a circular economy appears to have already taken hold. They track and communicate important key figures and are already planning or establishing measures to increase circularity. For others, however, there is still a lot of work to be done and we hope to see their strategies in the annual reports implemented in reality soon. Perhaps our study may even raise some awareness for this, because it's high time.” – Gary Lewis, CEO and Co-Founder, Resourcify.

The objective of this analysis was to determine which DAX companies are performing best in the areas of sustainability, waste management and circular economy. Depending on availability, all of the companies' information and data was taken from their current annual or sustainability reports. Due to the fact that more waste is automatically produced depending on the industry, different categories around sustainability were considered, which are included in the RSI with varying emphases. More detailed information on the methodology and evaluation can be found in the extended report. 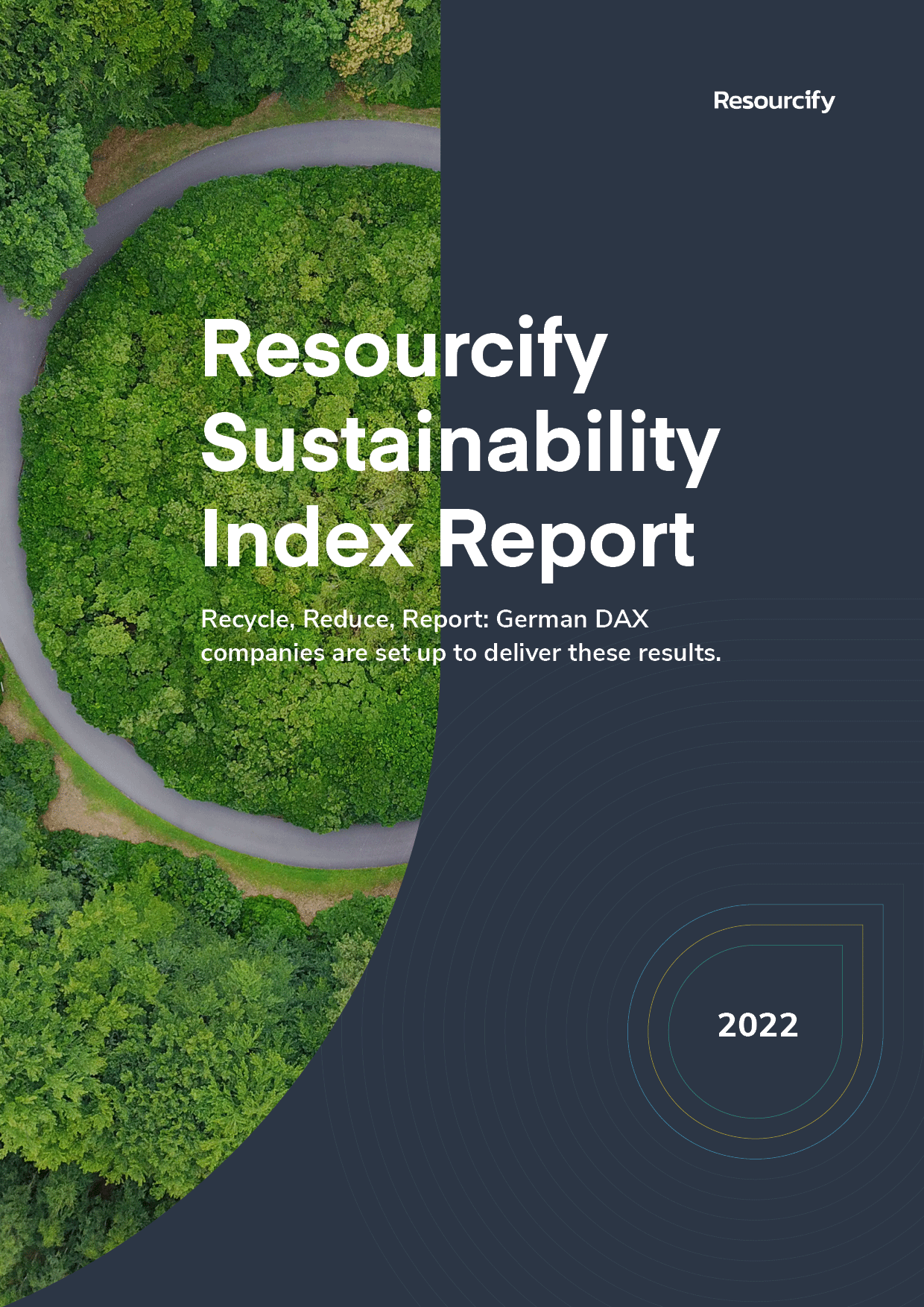